Shirley Valentine and the Republican Convention

Have you ever watched the movie, Shirley Valentine?  It seems like I catch it about every 10 years and each time, I am at a different stage in my life.  Right now, what jumps out at me is when she talks about the brave person she used to be when she was younger.  I think she is in her early 40s in the movie.  Not old but no longer the carefree young.  I can relate.  I wish I was still brave and hungry to explore life like I did when I was younger. 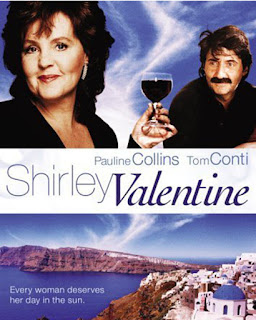 I doubt I would jump on a flight to Greece for a two-week adventure even if I did win it free.  I enter contests for travel.  Mostly here in the US but some European trips as well.  I suppose I would go but would probably take the cash option if offered.

I received my little prize from the (CBD) Brothers Apothecary.  I have not tried the tea yet but I ordered some capsules that promote deeper sleep.  The pills contain Valerian, Chamomile, Melatonin, and Skull Cap.  I took one last night at about 9:00 pm.  I thought it might take up to an hour to kick in but I started yawning about 9:30.  I went to bed and listened to my book for a while.  My Fitbit said I went to sleep at 10:54 pm.  I woke at 8:30 but was still tired so I listened to my book for a little while and fell back asleep until noon.

I often wake up too tired to get up so I'm not sure if this was the effect of the pill or my natural body response.  I think I'll try another one tonight just to see if it makes me sleep an extra long time again.  If so, I'll know to try it when I have those sleepless nights and stay up until 8:00 in the morning.

We had to cancel the Grand Son's 21st birthday party.  We made plans the week before when they announced the reopening of Texas only to close it again.  I really hated to miss celebrating this special birthday with my favorite person in the whole world but I read a news comment about a family holding a party for grandparents.  The host had the virus and didn't know and infected many family members including the grandpa who is hospitalized and not doing well.

I'm glad I saw the Grand Girls the week before because I would not have let them come over this week and I would have missed them for another long, long while.  They had expected to reopen schools in August but I imagine that will not happen.

I don't know where my brain has been but I just heard they are planning to hold the Republican convention in Houston.  Not No but Hell No.  That's all we need to have a bunch of outer towners running around mixing their virus germs with our virus germs.  That is the stupidest thing I've ever heard but then my check comes every week.  I'm not sure how I would feel if I was losing everything like so many people.

There is a difference between what you do out of necessity for your family and a high faluting vacation starring the Orange Cheeto.  Bah Humbug.