Out of Thanksgiving and into Christmas

I've spent an awful lot of time entering contests.  I was quite sure I was in store for something big when the end of October contests closed.  It sometimes takes two weeks or so before you hear the results.  Oh well.  I am actually getting quite burned out on entering.  After Christmas, I will take a break for a while.

My health is always a roller coaster ride.  I had quite a long spell of not feeling good.  I felt like it lasted about a month this time.  Then one day it just adjusted itself and I am doing pretty good.  My Endocrinologist retired and I have to start over with a new one.  So many questions and words of advice.  Also time for an eye exam and mammogram.  I would like to get it done this year but need to get off my caboose and do it.

The election had me quite stressed out.  I just didn't think I could live through another four years of him.  I started feeling a little better until I figured out he was going to be holding on to the door frame as they dragged him out.  I've been playing catchup, but I've read most of your posts by now.  I understand many of you guys are feeling the same way.  I would say let's just get to the Inauguration but I fully expect him to continue holding "events" and come up with a slogan about the steal.  I don't think we've heard the last of him.

I spent Thanksgiving home alone.  I talked to a few neighbors on my first dog walk and then some others on my second outing.  I thought my sister was bringing over some food for me but I guess we got our wires crossed.  It was probably a good thing or I would have been eating pie all day with the rest of the Thanksgiving meal as a side.  My son and daughter each had Thanksgiving at their own home with just their families.  I was invited to all but I just couldn't risk it.

I thought I would be more let down because I love the whole Thanksgiving food and family get together but I guess all the quarantining has become my norm.  It felt like any other day and I did feel superior for not having overindulged in sweets.

I ordered some new Christmas stencils and here is one I did yesterday. 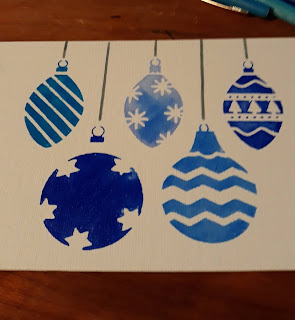 Black Friday tomorrow.  I realized looking at all the sales brochures and emails that I really didn't need anything.  I did buy myself a gorgeous KitchenAid Mixer for $199 but then canceled the order and bought one for $10.  I'm sure the $10 won't be great but as little as I will use it for making cookies with the Grand Girls, it will be fine.  Besides, who am I kidding?  No diabetic needs a fancy mixer that will beg to be used to make cookies and cakes.  Nope, hand-mixer will be fine.

I did order a Dyson Pet Hair Special vacuum.  It really does make a difference.  I'm not going to tell you I had to empty it twice during the whole apartment extra special clean up.  That would be embarrassing.

I was always the one who liked electrical items for presents.  It didn't matter if it came from Home Depot or Target, I loved it.  My poor Mom kept trying to give me beautiful china and glasswares until the year she gave me something with a plug apologizing and I don't remember what it was except I loved it.  Strange child I was. I blame it on the 60s.