A Win and Another Quick Catchup

Well, the money situation from the Old Owners is still up in the air although it is looking good.  Move-in date for the new aparatment is October 7.

I have all the appropriate vendors on standby - movers, electricity, cable, etc.  The new apartment wants money orders for the deposits which are supposed to be coming from Old Owner.  It looks like Old Owner's Manager has gotten the figures from new apartment and is working with the Corporate Office of Old Owners to get those money orders cut.  The deposits need to be in place 2-3 days before move-in.  So we'll see if they get the money to me in time to give to new apartments.

Just so life wouldn't be dull, New Owners have decided to power wash everything which meant all of our plants, etc. had to be brought in off the porches. 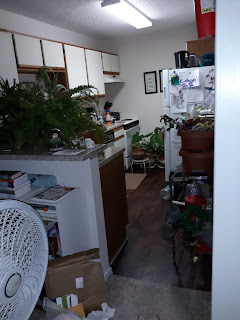 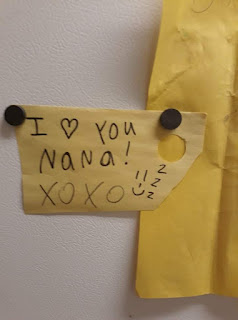 And I mustn't forget all my love notes and pictures on the fridge to brighten my new apartment.

I am feeling slightly less stressed, my chest tightens when a new snag pops up, but Buddy and I are walking a lot and I am entering a lot of contests to keep my mind busy.

I had another win this week.  A pretty lap quilt from an author, Kate Lloyd.  I think it is meant for a wall hanging but I already have more pictures than I have wall space.  I will move all pictures to the new apartment and ... maybe ... whittle them down.

My Dexcom G6 blood glucose reader is good for 10 days at a time.  It buzzed me last night to tell me I had to change today.  The Medicare supplier sends 3 transmitters at a time so when I change today it will be my last transmitter until the new shipment arrives.  Generally, this is not a problem but since I am probably moving in 7-8 days I'm not sure if the shipment will get here in time.  Worst case scenario, I will have to use old-school finger pricks, if I can find them in the boxes!!

No, I'll put some supplies in my "open me first" box.  I already have a bar of soap and a towel and a nightgown, because I know, had dirty and tired I'll be that first night.

I'm having trouble responding to Word Press blogs right now.  Not sure why but if your blog is on Word Press, please know I'm reading but can't respond. 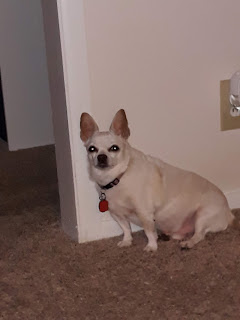 Buddy sitting at the kitchen doorway whining for his breakfast.

I got a whole slew of boxes that were near me for free on Craigslist.

I starting making my "Open Me First" list so I would have the things I really need in my car to unpack first.

If the house in the country does not work out, I have to pay all my deposits for the apartment on Saturday.

I got a quote from the movers and when he asked if I wanted packers I thought about Margaret telling how efficient her packers were.  If there are extra funds I'm thinking about doing that too.

I've talked with the old apartment manager and she is working on getting me the moving package money but didn't know exactly when since I am the first to file for the package.

I contacted the Visa Card people that I won the contest from and they are working on it.  Will everybody quit working on it and get it done.

I am rigid with anxiety.  So much is still up in the air but I'll just go take Buddy for an extra-long walk and see if that calms the nerves.

I have put in an application for an apartment I like but cannot afford.  I will be house poor.  Move-in date 10/7 but they will give me until 10/21.

I notified my old apartment owners that I had been approved and wanted the money.  They said I am the first to apply for the moveout package and they still don't know how they are going to disburse the funds????

I notified the new apartment owners that I would be moving between the 7th and 21st because I had to give 30 days notice so the 20th will be m-day at the latest.   However, I told them that if I didn't have the funds from the old owners I couldn't afford to move and will be staying for a while longer.

I am also on the waiting list for a brand new Senior apartment not that far from here.  I think half of my complex is on that waiting list. It is a smallish complex of 114 apartments and I am afraid I will be too far down the waiting list to get an apartment.  The price is much cheaper but I don't like hotel-looking apartments.

The apartment I have been approved is near my daughter and nearer my sister than I am here but further from my son by a good bit.

Deposits in general are outrageous also.  I don't know why I thought rents and deposits would be going down after Covid.

You can drive yourself crazy if you fight the system and I am determined to keep calm and "Keep on Trucking" if you remember this slogan from the 60s/70s. 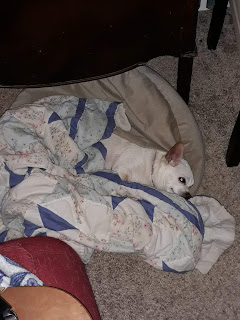 A Few Gusts and a Little Rain

Yesterday the wind was blowing so hard when I walked Buddy in the afternoon that I gave in and moved half of my plants indoors and placed the others in a block on the porch that I hope will not move if the winds are storm force.

That was the worst of it for my area, I think.  They closed schools and office buildings for today.  There is nothing worse than to have some type of terrible storm and your children are in school and you are at work and worried about getting to them.

What happens though when everything seems to be prepped for the storm and it doesn't come this way, then next time the powers to be will hesitate before shutting everything down and that is when it will happen.  It's the old "Cry Wolf" theory except we've seen it go so wrong before.

I'll wait until tomorrow to bring my plants back out.  Some of the pots are pretty heavy and I don't want to do it twice.

On other fronts, I did get confirmation of my Visa win, so good to know it wasn't a trick.  Tomorrow I'll go look at the apartment complex I'm thinking will be my next home.  We'll see.  Looks good on paper.

I haven't fixed my car yet.  It has stopped struggling to start.  My car is making me feel like I'm in the Eye of the Hurricane and all is quiet before hell breaks loose.

I have been entering contests like crazy the last couple of days.  It really takes a lot of time because you have to read the contest description to see if it is something you want or are qualified to enter.

I've seen a lot more contests where you have to use a receipt to enter or you can snail-mail your info in.  When I first started entering contests they were all mail-in.  You put your name, etc on a 3x5 card and mailed it to their address listed.  It was a time-consuming process. Much faster to type it in on the computer.

The Whirlwind of the Last Weeks

The last couple of weeks have been the best of times and the worst of times.  Here is what happened in not necessarily the correct order.

*    My apartment manager notified us that the apartments had been sold and that we had to move out.  The good part is that they have given us 16 months to do so.  The Buyer has also offered us a moving package of $2,500 which they will pay to the Seller company but the Seller company hasn't figured out how they will get the funds to us?? Like before we move, or after?

*    Just when I should be apartment hunting, the alternator has gone out in my car, at least that is my diagnosis.  I should be so lucky that it is only the battery.  And, remember, I just got the air conditioner fan fixed the week before that so, yeah, the pocketbook is very thin right now.

*    Additional money woes include two large yearly renewals that hit my bank this month.  Darn, there goes my food money so borrowed from my daughter.  Hahaha.  Turn about feels funny.

*    My contesting has taken a turn for the better.

I won a $500 visa gift card from my bank.  They usually send this kind of prize FedEx ground and I haven't been notified that it has been mailed yet.

Without being notified, I received a large box with perishable, dry ice, do not handle.  What have I bought now, I thought.  Turned out I won an Eggos contest for a  box of Honey Butter Chik'n & Waffles. Don't ask me what it is.  This prize goes to my daughter's step-son.

I won two more books and a dog toy.  The dog toy goes to my Son's big lab.

*    I know. I know.  I should have bought a lotto ticket this week but more money problems.  I opened an email that appeared to be from CVS Pharmacy where I have a frequent buyer card.  It asked a couple of questions and you get a small prize for answering if you pay the postage.  Turns out it was a scam and they tried to run a $40 moisturizer on my card.  The bank caught it, texted me did I authorize, I said no, and they said ok we are canceling your debit card and get a new one.  Oh lordy.  Not only am I brokeish but I can't even pull out the few dollars I have.  So I went looking for my checkbook, just in case, and couldn't find it.  I know where I thought I put it, but it has been so long since I wrote a check, I just don't know.

*    I did find an apartment locator that I really like and she helped me find some apartments in my price range.  I looked through all the online photos and found one out near my sister and one of my friends that is more than here but doable at the moment.  I figured if Margaret could buy a house online then I could rent an apartment that way too. Hahaha

*    I don't want to sound greedy or unthankful but if I could just win that new car, I would be so so so thankful.