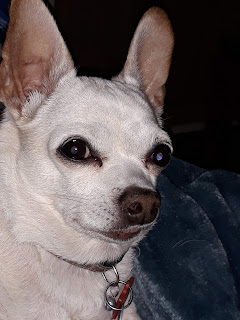 Hello again.  There has been a dark cloud stuck over my head for several weeks now.  I'll share some of the highlights.
The car key for my dear old car is the worst made car key in the world. I have replaced it at least three times now. I'm sure most of you have never replaced the fob on your car key.  Mine breaks right at the top so that the metal key comes away from the plastic fob.
In the past, I have gotten a whole new key made.  The price has now gotten up to about $200 so I decided to do what my son has been nagging me to do - order the replacement fob off the internet.  The price for a package of two fobs was $8.95 on eBay so I decided I could afford to try it and waste the money if it turned out not to work.

In between the break and before ordering the eBay fob, I order a replacement fob from the hardware store for $50.  The fob never came and never came and finally, we found out that the hardware store never placed the order.  This wasted a good 10 days of not being able to drive because of the hardware store's mistake.
So now the eBay key comes.  We, Grandson and I, put it together and but now the car won't start.  So we jump it, but the motor still won't catch.  So I call AAA who comes out and tells me the battery is great so it must be the starter.  The next day I call AAA for a tow and instead of taking it to my old shop, I let them take it to a highly rated shop near me.
The day I put the car in the shop they could not get to it.  I discussed with them what they thought a rough estimate on a starter would be and he said $500 to $1000.  I laughed and said it better not be a $1000 to let him know that was not going to happen.  Unfortunately, the next morning they call me and said it is the starter and it will be $950. Now keep in mind I am living on social security in my new more expensive apartment.  Anyway, I tell him to go ahead because I have been stashing money away to move back to the other side of town to the now-being-built apartments my old manager will manage.
I let my children know it is in the shop for $950.  My son, protecting his Mom, asks me for the number and calls the shop.  Son insists they are over-charging me and he can do it.  Well, he can do it but he doesn't really like to work on cars so I say no to that.
Long story short after what seemed like forever the car is home and working fine.  The anxiety I felt over all that time did not release me all at once and I walked around with jangly nerves for a couple of more days.
During this dark time, I had also been scheduled for a certain blood test that Medicare required before I could get my insulin pump approved. I had scheduled and canceled several appointments because my car wasn't running or because my blood sugar had fallen during the night and I had to eat something which meant I had not fasted all night.  The doctor and the healthcare company handling the insulin pump had been calling and emailing me about the hold-up.  It takes two days for an opening but I got there as soon as my car was back.
Looking back it doesn't seem like it was all that bad but wait, there is more.  My old laptop died just before I moved here in October so I bought a new one at the end of October but while this dark cloud was dogging me, I spilled coffee on my brand new computer and killed it.  Yes, a dead motherboard and the keyboard ruined and it could be fixed for $750 but I only paid $350 for it.
This time I did not hesitate and my first outing the day I picked up my car was to buy the same new computer.  Shit happens, that is just life.
Whew.  I hope things are back to normal now.
More later ...

A Couple of Wins

I was notified Monday that I won a Planters Peanut Nutstologia Gift Box worth $200.  It did not say what was in it but I assume, other than a large can of Planters Peanuts, something like a baseball hat with PP emblem or possibly a stuffed Mr. Peanut. Since it is a take on nostalgia, who knows.

The second prize was a bit unusual.  Buddy won a photo contest and a $100 Visa card from BarkWiki.  Not too bad, Buddy.

My poor cut finger is still killing me.  Yes, Shirley, I should have gotten that tetanus shot. You know that kind of stuff worries me. Because the cut was across the first bend/knuckle, every bend bothers it.  And, since this is a major contest time, I am doing my best to enter without using that finger.

This will be a short post as I have injured my right index finger and it is very hard to type without it. 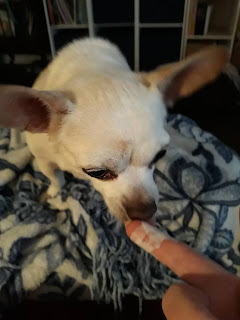 Of course, Buddy had to check out the smell of blood and bandage and ointment on the hand meant for scratching him.

How did I manage to be so clumsy?  I slammed the iron gate to the front mailbox center on my finger.  Not sure how I managed that but I did.

The cut is short but right at the first bend so I tried to apply plenty of bandages to remind me not to bend it and open the cut.  There is also a nice bruise on the other side of my finger.

I think I could have used a stitch or two but I just couldn't muster a visit to a medical quick stop as I don't have a regular physician, just my endocrinologist.

As a diabetic, I am particularly careful about injuries.  My diabetic BIL has had some awful happenings to his feet and I don't want anything cut out or off.

Long story short, I won't be typing comments for a short while but I will be reading, so keep me informed.