New Insulin and Other Happenings

I'm so glad to report that I finally got my new insulin, Novolog FlexPen, this week.  I can tell already that my numbers are lower. The FlexPen is a common insulin for diabetics. I just couldn't afford both insulins I needed to take.  Type 1s like me take a slow-release in the morning and a fast-release with each meal.  My sweet little doctor worked with the manufacturer and medicare to get me a good price.  It took six months but Yahoo anyway. The wait was worth it.

My Continuous Glucose Monitor (CGM) is also on order.  Again it is the doctor, Dexcom, Medicare, and me all shuffling paperwork around. Since I've got that supplemental insurance, it should be free.  Info from Dexcom.

A small, wearable sensor and transmitter sends your glucose numbers to a smart device† or receiver every 5 minutes. It's easy to wear and easy to use.‡

I'm worried about what supplemental supplies are needed and, more importantly, their cost.  I'll cross that bridge when I get there.  The insulin pump is still in my future.

Also in the medical/non-medical happenings is that I have been taking Elderberry Gummies for the last two months.

The berries and flowers of elderberry are packed with antioxidants and vitamins that may boost your immune system. They could help tame inflammation, lessen stress, and help protect your heart, too. Some experts recommend elderberry to help prevent and ease cold and flu symptoms. WebmdSep 21, 2020

Elderberry may lower blood sugar levels. If you are also taking drugs for diabetes, taking elderberry may increase your risk of developing hypoglycemia, or low blood sugar.Feb 2, 2016 Broadlawns

Call me crazy but I've been feeling pretty good lately (aside from one bad slump) and I have to wonder how much the Elderberry has affected me.  I've never been a vitamin taker.

Old school vitamins used to hurt my stomach but the doctor got me started on Melatonin for my sleep problems.  Let me tell you, Gummies are the only way to go.  So at night, I take two Melatonin Gummies and two Elderberry Gummies and I've been waking up feeling great.  As far as the effect of the Melatonin (which I also never believed in before) on my sleep, I seem to be getting sleepy a couple of hours after the Melatonin but even better, I am staying asleep most of the night.  Now if they would only make Allergy Gummies.  Hahaha.

Where have I been?  What have I been doing?  I can't even tell you.  If you know what lollygagging is, then you know what I've been doing.  Wandering aimlessly and thinking of projects I knew I'd never carry out.  But Kim called me out on this and told me to get back to work so here I am again.

Now I know some of you are light-years ahead of me, but I've started watching Home Town. Now when I say watching, I mean bingeing and there is nothing better to binge than a program that is 5 seasons long.  I think I am in Season 3 and I sure will be sad when it is over.  Even though I like to see rebuilds, most of these reality programs have too much talking, but I am good with this one so far.  Ben and Erin combine the best of country personality with a good education (Ole Miss) and present a really lovable couple.

My ex-husband was from Alexandria, Louisiana and we met here in Houston and moved back to Alec, as they call it.  That was 1971 and the streets of Alexandria were every bit Steel Magnolias-esque.  It was so pretty but at the time while I appreciated the beauty, I couldn't get comfortable in a small town.  I would guess that with the Air Force base and all the surrounding small towns, it was about 50,000 people at that time.  Over the years as the town grew it was no longer the Southern Beauty it had been, but my longing to live in one of Ben and Erin's houses made me regret not feeling the love for Alec back then. I find that interesting.

I know you are curious about my Buddy Boy.  Little fat guy is still trying to keep the sidewalks free of people and other dogs, in other words barking a lot.  My doctor asked me to fit in a third walk each day so I got a dog stroller for the evening walk. I kept the front screen down for the first couple of blocks until he got used to it, but like all dogs, he had to stick is head out of the window.  Now I keep it open in the front and he hasn't jumped out ...... yet. 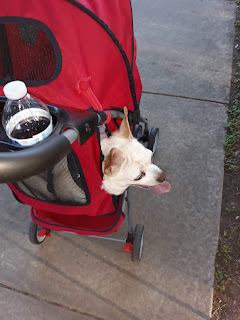 The girls were here this past weekend for the first time in a long time.  We went to the Zoo Saturday and I have a lot to say about that in another post, but first, a picture on the train that runs around the Zoo. 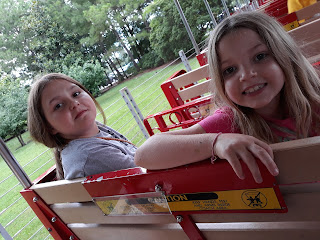 They are growing so fast.  The youngest will be 8 this month and the Artist will be 12 in December.  The Grandson will be 22 in June.  He was my constant companion for so long but you know, he is off on his journey to manhood and I probably won't get home visits until he hits 35, or needs a babysitter.  His girlfriend of 100 years will graduate from college next year so I expect she is going to be ready to get married someday in the near future.

Speaking of, their Father, my Son, and his wonderful girlfriend just got engaged.  No wedding details yet.  He is letting her make all the decisions and they are paying for it.  She also grew up in a different small Louisiana town so that also gives them a shared history which I think is nice.

She has two sons that are around the same age as my two grandgirls. After a weekend with the girls, I don't know how she and my son do it. Hahahaha.

That's all for now.  I'll catch you up on the rest later.