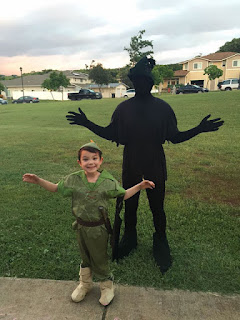 Isn't this the cutest?  Not mine. Found on Pinterest.

Today we are going to the Son's house for a Pumpkin Carving Festival.  Everyone (my daughter, her girlfriend and girlfriend's son; my sister and whatever of her family members; son, his girlfriend and their four children; and me) is bringing their own pumpkins, carving tools and templates in an attempt to bring home carved pumpkins for Halloween.  Kind of late but you try getting this many schedules together.

I wouldn't mind bringing home some pumpkin seeds to roast.  Anybody have a good spice recipe?

It is pretty nippy here but the Son has one of those gas patio heaters that came with the house.  I don't think the weather will bother me but the sound of all those little voices may drive me inside.

Nothing exciting to tell.  I spent all week trying to go to bed and get up so I could be on daylight hours for today.  Hahaha.  Last night I got up at 10:00 pm.  I thought it was 10:00 am and I forced myself to get out of bed.  Made my coffee.  Texted my daughter I would drive myself today.  Then sat down to drink my coffee and watch something on the tube.  Only then did I realize it was dark outside.  So I looked at my phone and damned if it wasn't night.  Surprisingly, I watched one program and went back to sleep. Got up at 4:00 am.  I'll probably be ready for bed before all the pumpkins are cut.

I read a really interesting article about circadian rhythm/sleep cycles/diabetes and how they affect your glucose numbers.  It basically said what I had been thinking.  When I get up early - like today's 4:00 am - my numbers are better and stay better.  Then I found a new website Insulinnation.com and it has similarly informational posts about T1 diabetes.  Watch out!  I may become well informed.

I met a new neighbor this week.  He asked me if I was interested in gardening as there is a community bed that has been laying unloved since I moved in.  Since I just met the fellow I didn't want to go into the saga that is my diabetic health problems when here he was trying to start a food garden the whole complex could take advantage of.  If the time is ever right, I'll explain why I can't be counted on to (1) be awake during the day and (2) have the energy to move from the bed to the couch.  Drat.  Being old and unhealthy is a drag.  Plus, he was kinda cute.  I guess I'm not all dead if I could still think that!  Hahaha.

Just a lot of thoughts 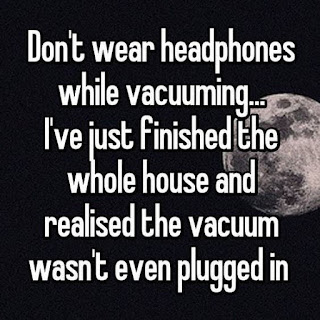 Marie's blog made me think of something I heard on House Hunter's International.  Two young women were looking for a shared rental on a beautiful island.  One wanted affordable housing and the other wanted a really nice home but especially a good view.  They looked at one house which had a view of a beautifully treed mountainside.  She said that was not her idea of a beautiful view she wanted to look out at the water.  While I do LOVE a Waterview, I equally Love a picturesque forest or wooded area.  I'd never thought about which I prefer.  It seems I'm easy to please - I love both.  What about you?

Update: I deleted the rest of this post because I'm so tired of hearing myself talk about politics.  I'm going to try to stay off the news channels until after Christmas.  If it looks like the World is coming to an end, someone please let me know.  LOL.

What a difference a day makes -- in the weather 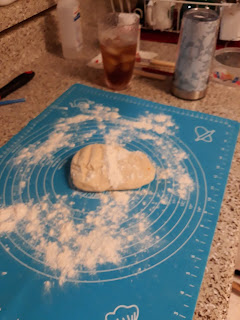 Yes, I am still playing with my salt dough ornaments.  Above you can see the gray and white tumbler I use as a rolling pin.  I have a really nice rolling pin but for the small amount I make at a time the tumbler works better. 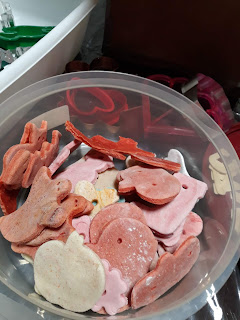 Here are some of the Halloween ornaments I made for the Grand Girls to paint.  You can see I dyed the dough with red and yellow food coloring to make it orange and a little more Halloween specific.  The Girls were supposed to come over last weekend so they could paint them but something else came up. 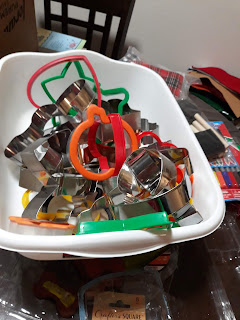 I have a great number of cookie cutters.  Like any craft I get into, I over-purchased my supplies and these are only a few. 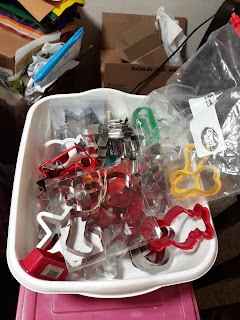 Have I done anything else interesting?  Quite frankly, no.  I have watched a fair amount of tv while surfing on Pinterest.  I found one or two shows on real tv that I liked but honestly, I guess I must have gotten so specific in my taste that I find it harder and harder to find programs I am loyal to.

The daughter also got a new/old car after her car was flooded in that last big rain.  It was getting pretty old so she is happy and is used to having a car note so good for her.  My floorboards are still a little stinky.  I leave the windows open many nights to keep it aired out.  I don't think anyone would want to steal it and I think it will eventually lose the smell.  If not, I'll just put my big girl panties on and go anyway.

And, before I close ....  How 'bout those cold fronts?  We have had the most wonderful weather.  Lots of rain but in a nice soaking way.  Today the temp was 71 when I got up.  Unheard of.  I know I'll be back in shorts before the next three holidays.  Nothing like Christmas in shorts and cowboy boots.

Two Passes and a Fail

I thought I'd share a couple of pictures of my salt dough ornaments. 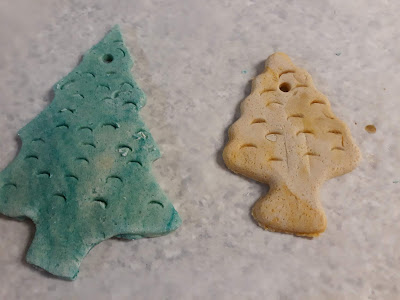 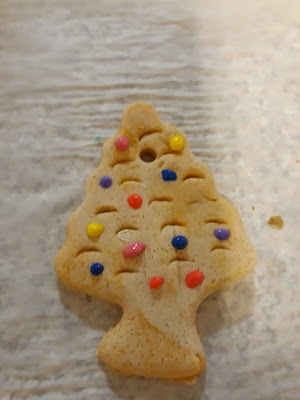 Here I used Puffy Paint to make ornaments on the tree.
I found that the cheap acrylic paint from the Dollar Store also
covers the salt dough well but I am not very talented with a paintbrush
so dabbing the Puffy Paint worked better for me. 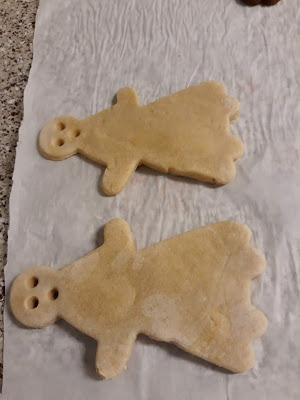 I can't figure out how to rotate this picture but you can see
that the angels look more like ghosts.  I used a straw
to make the holes (I find two holes are better to hang the bigger
ornaments).  I also have a skewer I use and will try that
on next angels.  Hahaha.  This is a live and learn business.

All is right with the world

All is right with the world - except maybe in Trumpville where the mighty Donald keeps striking out!

As I was cleaning up and organizing my blogs I follow I came across a couple of new diabetic recipe Blogs I wanted to share.  Sometimes it only takes a tweak in the recipe to bring the carbs down.  I also found two blogs share info on Type I diabetes and also have information on the insulin pump which may be in my future one day.  I have these and several more marked to read and review but these two below definitely made my list.

Another thing that slowed down the process of organizing blogs is that I love to look on other people's Blogs I Follow list and click over to see if that blog interests me.

I have a friend, my oldest and dearest BFF, and it always surprises me how much I like most of the friends she has made over the years.  This has proved true for 40 years.  I guess that many of the blogs I follow are also followed by bloggers whose blogs I like.   You get where I am going with this.

I have to admit I don't like to follow lots of blogs because then I feel pressure to hurry and read and respond and it starts to take some of the fun out.  I have also noticed that there are a circle of us that somehow all found each other.  Neat, huh.

So I'll be fine-tuning this blog and visiting new blogs to see what others are up to.

I spent a ridiculous amount of time copying my blog reading list off google and adding it to this new blog.  It was surprising to see the blogs that are no longer active and I removed those and the blogs that are no longer in the subject area that I am reading these days.  It was interesting to see blogs I use to follow on jewelry making, small farms, a few on fashion and a few on frugal living.   Actually, I think it is interesting to see how gung-ho I get on various subjects at different times.

Since I do my blog reading on Bloglovin', I also had to be sure to add some of you that I was not reading back in the google save days.  So, of course, while I was "doing", I went ahead and deleted the inactive blogs and various subjects off Bloglovin'.

I worked my little brain to death flipping back and forth from all those sites.  Anyway, it is done and I'm never doing it again.  Hahaha.

I also had a doctor's appointment to get the nasty lump on my back looked at.  You know I have claw-like fingernails and I had scratched the top off several times.  Luckily, it was not Cancer but some cyst-thingy.  Why do I always jump to the serious side of every injury?  I guess because I like to go in with a Plan A and B and even C if it comes to me.  Dummie me.

Well, that's it for right now.   I'm not sure what is the best way to notify everyone of my new blog address.  I'll work on that tomorrow.

I had to start a new blog because blogger archived my blog after I didn't pay the domain registration name.  Blah Blah Blah.  It's a waste of time to fight and a waste of my money to pay the $100 restoration fee.  So I'll try and link up with all of you again.  Luckily I read all my blogs through Blogger so you are all stored there.