Nothing big to report

No wins to report.  The pickings have been kind of slim but they'll probably pick up around the holidays.

I had a rather strange thing happen.  I think I've talked about Ziggy my Blue Delta Male Beta.  Well, he died Sunday night after I had gotten an algae eater and algae ball that weekend.  I called the store and told them but honestly, I thought I would cry on the phone.  That little rascal was such a pet.  When I got out of my chair he would race to the front to see if I was gonna feed him.  He would go in his castle at night when he wanted me to turn off the aquarium light.  He would follow your finger when you moved it across the outside glass.  He was just so much fun.  I feel like I did something wrong and feel so guilty.  I'll probably get another beta but I'm still in grief.  Who knew you could grieve for a fish?

Another reason I haven't gone to the pet store is the rain we've had from TS/Hurricane Beta.  Since I've been staying away from the news I almost missed it coming this way.  The apartments have me so well trained now that I took my plants down without being asked.  I just lowered them to the floor but we didn't have any high winds here, just lots of light, picture-perfect rain.

My son is on vacation and flew over California.  He sent me a picture of the fire through his airplane window.  It was so sad.  What a terrible year this has been.

Everyone is healthy around here.  I hope my Son and DIL are still healthy when they get back but I refuse to let myself worry.

I received a response from Bob's Red Mill stating that they didn't even have a contest going on Instagram but would send me some samples for my troubles and thanked me for informing them. That was nice of them and I was glad to learn they were not the source of the scam.

Now, the new win was $2,000 put into a Nest529 College Savings account in the name of my Granddaughter.  You can only use it for college expenses like tuition and books. You cannot pull the money out if the Granddaughter does not go to college.  In fact, you have very little control over it except for submitting receipts for college.  This account is owned by the Nebraska Education Savings Plan Trust.   I'm not familiar with Nebraska law but 529s are run a little bit differently in Texas, if I remember correctly from my working days.  I wish it was $2,000 in my bank account but I am truly grateful that I am able to do this for my granddaughter and son.

You guessed it.  I have a big smile on my face and in my heart.

I won two Instagram contests over the weekend.  The first was for a yarn giveaway which I was very excited to win. However, an odd thing was that I was required to sign up online with some movie platform for a free week in order to win my free yarn.  I didn't want to belong to this movie platform but I read all the fine print that said I could cancel after my free period and there would be no further charge.  Yea, right. I did it though and monitored my bank account carefully.  There was a $1 pending charge from them but it dropped off.

Then I was notified I won the contest from Bob's Red Mill.  I've heard of them but I was again sent to a different but exactly the same movie platform.  This time I really rebelled.  I told them I didn't want it and gave them my address and said to send the prize to myself.  They refused and said it was required.  So I tried to log on and the site wouldn't let me.  I can only assume it was because I entered then canceled from the yarn win.  I called the helpline and the woman kept telling me something to do and then would try to get off the phone before I could even try her suggestion.  I never was able to log on. I contacted the contest people again but since it was the holiday weekend I got no response.  I contacted Bob's corporate headquarters and the same, no response because of the holiday.  So I waited and no response from either after three days.

Yesterday I saw a post from the yarn lady saying someone was hijacking her account and she would never ask for a credit card number.  I'm going to contact her shortly and let her know about my experience.

I've tried to be patient through this but today I decided to post on Bob's Red Mill Instagram account, his corporate contact page, and the latest giveaway that Bob has posted to warn future entrants.

Wild, huh?  I did want the Bob's prize but I don't really expect to hear from anyone.  Then, after all that, I got an email from Quaker Chewey contest I won.  I received a large box from them already and they originally told me the "gift card" would come under separate cover.

When you hear gift card do you think something like Visa or a store card to be spent one place?  I just wasn't sure so I've been patiently waiting and hoping it is a Visa, supposedly in the amount of $250. That is a nice bit of change and I'm going to believe it when I see it.  Anyway, the email I just received said it is on its way by Fed Ex.  I can only hope.

Another Win and a Missed Birthday Celebration

I received my latest win from @narwhalblueberry on Instagram.  I absolutely love it.  It will be my little piece of beach that I never got to see this summer.  I recommend her if you are looking for a gift for yourself or someone else.  She is in Guadalajara, Spain, however, and mail being what it is - don't even be in a hurry.  #$%$%# (cursing at the orange one). 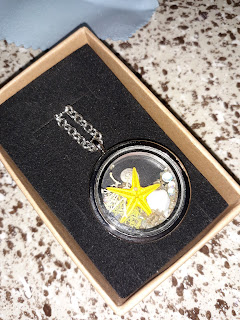 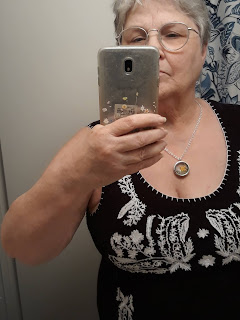 I've been watching way too much TV lately but many of them have been foreign films - because I've already binge-watched everything I thought I could possibly like.  What I like about foreign films is seeing the countryside or city views.  I wonder if the moviemakers use the same locations as an American director would?  Do we see more of the real Belgium, for instance, if it is a Belgium production?  I saw one that was set in Bath, England.  It was the most beautiful ancient city I have ever seen.  If I ran away from home, that is where I would go.

One thing I see a lot of is the wind turbines.  I've never seen one up close, of course, not too many in downtown Houston but since I have traveled so little over the last couple of years there might be amazing things out there I am missing.  That why I love you bloggers, you have shared so much I'll never get to see.

I did not get to celebrate my Son's birthday last week.  That is the 4th birthday we have not been able to celebrate as a family.  I miss my Grand Girls so much but every time I think I'll break the quarantine, I think of how long I've already been inside and it only takes one exposure.  I miss family celebrations more than anything else.  Darn my diabetes and the added risk that adds.

A lot of contests expired at the end of August so I am hoping that I can report another win in the near future.