Just how do you tell if your body has been invaded by an Alien? 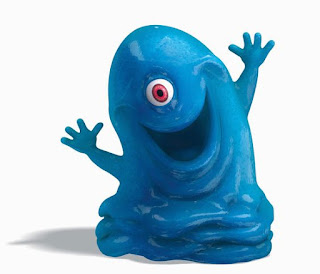 When you start doing things YOU would never do.

Thursday I texted my son to tell him I was available if the Grand Girls wanted to come over.  (Doesn't that sentence sound strange even though my family lives by texts).

It was like something crazy took over me and I had to keep moving, changing, reboxing, and recycling anything and everything in there.  I was possessed by an Alien from the Planet of Declutter. 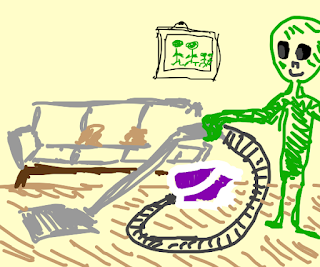 Can you imagine what your life would be like if you didn't have a dedicated place to put Christmas away?  Maybe an Alien would invade you too.

After I recovered from that, I heard the warnings about the terrible weather reported to be heading our way so I removed my planters from the balcony rail and sat them all securely on the balcony floor. They are pretty heavy since I put some pea gravel in the drain chambers on each long side of the planter.  I made them just heavy enough that I could lift but weighty enough not to fall off and land on another resident.  LOL. 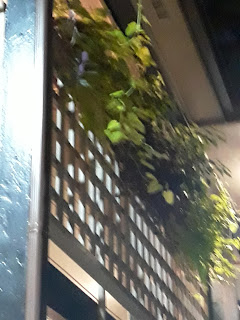 This picture is pretty fuzzy but it gives you an idea of how long and thick the flowers had grown.  When I was pulling one of the planters up the green and purple wandering jew got caught in the trellis and literally pulled the whole section of wandering jew out.  It really hurt my heart.  I collected the two feet of flowers and stems and soaked it in a bucket until I could decide what to do.

I recently picked up a nice large vase that I had intended to use as a beta aquarium.  This morning I decided I had to do something about the whole plant situation.  After I returned all the planters to balcony rail since the bad weather has not arrived (knock wood.  please don't make me get up at 3:00 in the morning to move the planters because the weather has finally blown in.)

Then I took the large vase intended for a beta and started separating stems, removing dead leaves and ends, and prepared my poor wandering jew for a life as a water growing plant.  I placed the vase on the buffet which gets plenty of light from the window.  There is a good chance it could prosper there.  I'll post a picture as soon as I can tell if the plants will live or if they will be replanted into something else.